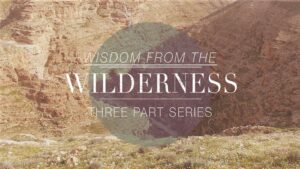 As we continue in this unprecedented time of a global pandemic, we feel as if we are lost in a wilderness, unsure of what will happen next. Yet as we look to scripture, the wilderness has often been a place where the people of God learn profound truths. Over the next three weeks, we’ll look at three different moments of wilderness: a near defeat at the Red Sea, a prophet who skips-town during a famine, and finally a temptation to take the easy way out. In each moment we’ll seek to draw wisdom from the wilderness.

God’s people have escaped Egypt, but now stand on the verge of a vast unknown. With the enemy hot on their heels and an impassible Sea in front of them, some have even begun to doubt God’s goodness (or Moses’s hearing), with the question, “Have you brought us into this wilderness to die?
Exodus 14:19-31 New Revised Standard Version (NRSV)
19 The angel of God who was going before the Israelite army moved and went behind them; and the pillar of cloud moved from in front of them and took its place behind them. 20 It came between the army of Egypt and the army of Israel. And so the cloud was there with the darkness, and it lit up the night; one did not come near the other all night.

21 Then Moses stretched out his hand over the sea. The Lord drove the sea back by a strong east wind all night, and turned the sea into dry land; and the waters were divided. 22 The Israelites went into the sea on dry ground, the waters forming a wall for them on their right and on their left. 23 The Egyptians pursued, and went into the sea after them, all of Pharaoh’s horses, chariots, and chariot drivers. 24 At the morning watch the Lord in the pillar of fire and cloud looked down upon the Egyptian army, and threw the Egyptian army into panic. 25 He clogged[a] their chariot wheels so that they turned with difficulty. The Egyptians said, “Let us flee from the Israelites, for the Lord is fighting for them against Egypt.”

26 Then the Lord said to Moses, “Stretch out your hand over the sea, so that the water may come back upon the Egyptians, upon their chariots and chariot drivers.” 27 So Moses stretched out his hand over the sea, and at dawn the sea returned to its normal depth. As the Egyptians fled before it, the Lord tossed the Egyptians into the sea. 28 The waters returned and covered the chariots and the chariot drivers, the entire army of Pharaoh that had followed them into the sea; not one of them remained. 29 But the Israelites walked on dry ground through the sea, the waters forming a wall for them on their right and on their left.