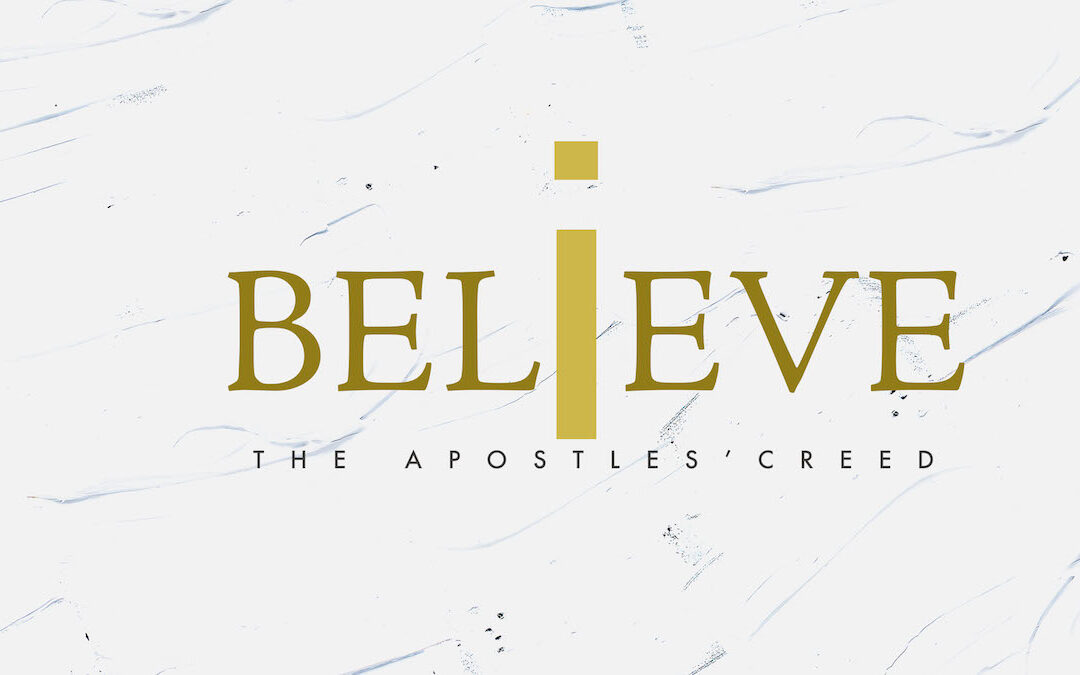 Inspired by the commitments of our confirmands, this sermon series focuses on the basic beliefs of the Christians faith, as outlined in the Apostles’ Creed.

April 11 God the Father, Maker of Heaven and Earth

April 18- Jesus Christ, His Only Son, Our Lord

New Revised Standard Version Jesus and Thomas 24 But Thomas (who was called the Twin[a]), one of the twelve, was not with them when Jesus came. 25 So the other disciples told him, “We have seen the Lord.” But he said to them, “Unless I see the mark of the nails in his hands, and put my finger in the mark of the nails and my hand in his side, I will not believe.” 26 A week later his disciples were again in the house, and Thomas was with them. Although the doors were shut, Jesus came and stood among them and said, “Peace be with you.” 27 Then he said to Thomas, “Put your finger here and see my hands. Reach out your hand and put it in my side. Do not doubt but believe.” 28 Thomas answered him, “My Lord and my God!” 29 Jesus said to him, “Have you believed because you have seen me? Blessed are those who have not seen and yet have come to believe.”

April 25- Conceived by the Holy Spirit, Born of the Virgin Mary

New Revised Standard Version The Birth of Jesus Foretold 26 In the sixth month the angel Gabriel was sent by God to a town in Galilee called Nazareth, 27 to a virgin engaged to a man whose name was Joseph, of the house of David. The virgin’s name was Mary. 28 And he came to her and said, “Greetings, favored one! The Lord is with you.”[a] 29 But she was much perplexed by his words and pondered what sort of greeting this might be. 30 The angel said to her, “Do not be afraid, Mary, for you have found favor with God. 31 And now, you will conceive in your womb and bear a son, and you will name him Jesus. 32 He will be great, and will be called the Son of the Most High, and the Lord God will give to him the throne of his ancestor David. 33 He will reign over the house of Jacob forever, and of his kingdom there will be no end.” 34 Mary said to the angel, “How can this be, since I am a virgin?”[b] 35 The angel said to her, “The Holy Spirit will come upon you, and the power of the Most High will overshadow you; therefore the child to be born[c] will be holy; he will be called Son of God. 36 And now, your relative Elizabeth in her old age has also conceived a son; and this is the sixth month for her who was said to be barren. 37 For nothing will be impossible with God.” 38 Then Mary said, “Here am I, the servant of the Lord; let it be with me according to your word.” Then the angel departed from her.

May 2- Suffered under Pontius Pilate, was Crucified, Dead, and Buried

Jesus Sentenced to Death 13 Pilate then called together the chief priests, the leaders, and the people, 14 and said to them, “You brought me this man as one who was perverting the people; and here I have examined him in your presence and have not found this man guilty of any of your charges against him. 15 Neither has Herod, for he sent him back to us. Indeed, he has done nothing to deserve death. 16 I will therefore have him flogged and release him.”[a] 18 Then they all shouted out together, “Away with this fellow! Release Barabbas for us!” 19 (This was a man who had been put in prison for an insurrection that had taken place in the city, and for murder.) 20 Pilate, wanting to release Jesus, addressed them again; 21 but they kept shouting, “Crucify, crucify him!” 22 A third time he said to them, “Why, what evil has he done? I have found in him no ground for the sentence of death; I will therefore have him flogged and then release him.” 23 But they kept urgently demanding with loud shouts that he should be crucified; and their voices prevailed. 24 So Pilate gave his verdict that their demand should be granted. 25 He released the man they asked for, the one who had been put in prison for insurrection and murder, and he handed Jesus over as they wished.

May 16 (Ascension)- He Rose from the Dead, Ascended into Heaven, Shall Come Again

6 So when they had come together, they asked him, “Lord, is this the time when you will restore the kingdom to Israel?” 7 He replied, “It is not for you to know the times or periods that the Father has set by his own authority. 8 But you will receive power when the Holy Spirit has come upon you; and you will be my witnesses in Jerusalem, in all Judea and Samaria, and to the ends of the earth.” 9 When he had said this, as they were watching, he was lifted up, and a cloud took him out of their sight. 10 While he was going and they were gazing up toward heaven, suddenly two men in white robes stood by them. 11 They said, “Men of Galilee, why do you stand looking up toward heaven? This Jesus, who has been taken up from you into heaven, will come in the same way as you saw him go into heaven.”

May 23 (Pentecost)- The Holy Spirit/Baccalaureate

New Revised Standard Version
The Coming of the Holy Spirit

2 When the day of Pentecost had come, they were all together in one place. 2 And suddenly from heaven there came a sound like the rush of a violent wind, and it filled the entire house where they were sitting. 3 Divided tongues, as of fire, appeared among them, and a tongue rested on each of them. 4 All of them were filled with the Holy Spirit and began to speak in other languages, as the Spirit gave them ability.

5 Now there were devout Jews from every nation under heaven living in Jerusalem. 6 And at this sound the crowd gathered and was bewildered, because each one heard them speaking in the native language of each. 7 Amazed and astonished, they asked, “Are not all these who are speaking Galileans? 8 And how is it that we hear, each of us, in our own native language? 9 Parthians, Medes, Elamites, and residents of Mesopotamia, Judea and Cappadocia, Pontus and Asia, 10 Phrygia and Pamphylia, Egypt and the parts of Libya belonging to Cyrene, and visitors from Rome, both Jews and proselytes, 11 Cretans and Arabs—in our own languages we hear them speaking about God’s deeds of power.” 12 All were amazed and perplexed, saying to one another, “What does this mean?” 13 But others sneered and said, “They are filled with new wine.”

43 Awe came upon everyone, because many wonders and signs were being done by the apostles. 44 All who believed were together and had all things in common; 45 they would sell their possessions and goods and distribute the proceeds[a] to all, as any had need. 46 Day by day, as they spent much time together in the temple, they broke bread at home[b] and ate their food with glad and generous[c] hearts, 47 praising God and having the goodwill of all the people. And day by day the Lord added to their number those who were being saved.

June 6- The Communion of Saints

New Revised Standard Version
The Coming of the Lord

13 But we do not want you to be uninformed, brothers and sisters,[a] about those who have died,[b] so that you may not grieve as others do who have no hope. 14 For since we believe that Jesus died and rose again, even so, through Jesus, God will bring with him those who have died.[c] 15 For this we declare to you by the word of the Lord, that we who are alive, who are left until the coming of the Lord, will by no means precede those who have died.[d] 16 For the Lord himself, with a cry of command, with the archangel’s call and with the sound of God’s trumpet, will descend from heaven, and the dead in Christ will rise first. 17 Then we who are alive, who are left, will be caught up in the clouds together with them to meet the Lord in the air; and so we will be with the Lord forever. 18 Therefore encourage one another with these words.

June 13- The Forgiveness of Sins

New Revised Standard Version
The Laborers in the Vineyard

20 “For the kingdom of heaven is like a landowner who went out early in the morning to hire laborers for his vineyard. 2 After agreeing with the laborers for the usual daily wage,[a] he sent them into his vineyard. 3 When he went out about nine o’clock, he saw others standing idle in the marketplace; 4 and he said to them, ‘You also go into the vineyard, and I will pay you whatever is right.’ So they went. 5 When he went out again about noon and about three o’clock, he did the same. 6 And about five o’clock he went out and found others standing around; and he said to them, ‘Why are you standing here idle all day?’ 7 They said to him, ‘Because no one has hired us.’ He said to them, ‘You also go into the vineyard.’ 8 When evening came, the owner of the vineyard said to his manager, ‘Call the laborers and give them their pay, beginning with the last and then going to the first.’ 9 When those hired about five o’clock came, each of them received the usual daily wage.[b] 10 Now when the first came, they thought they would receive more; but each of them also received the usual daily wage.[c] 11 And when they received it, they grumbled against the landowner, 12 saying, ‘These last worked only one hour, and you have made them equal to us who have borne the burden of the day and the scorching heat.’ 13 But he replied to one of them, ‘Friend, I am doing you no wrong; did you not agree with me for the usual daily wage?[d] 14 Take what belongs to you and go; I choose to give to this last the same as I give to you. 15 Am I not allowed to do what I choose with what belongs to me? Or are you envious because I am generous?’[e] 16 So the last will be first, and the first will be last.”[f]

42 So it is with the resurrection of the dead. What is sown is perishable, what is raised is imperishable. 43 It is sown in dishonor, it is raised in glory. It is sown in weakness, it is raised in power. 44 It is sown a physical body, it is raised a spiritual body. If there is a physical body, there is also a spiritual body. 45 Thus it is written, “The first man, Adam, became a living being”; the last Adam became a life-giving spirit. 46 But it is not the spiritual that is first, but the physical, and then the spiritual. 47 The first man was from the earth, a man of dust; the second man is[a] from heaven. 48 As was the man of dust, so are those who are of the dust; and as is the man of heaven, so are those who are of heaven. 49 Just as we have borne the image of the man of dust, we will[b] also bear the image of the man of heaven.